The Motsameta Monastery in Kutaisi, Georgia

I only had to learn two words in Georgian to enjoy my way around the country: “thanks” and “cheers.” There were other phrases I’d prepared, but with all the endless food, wine and genuine warmth that was thrown my way, I was about three days into the trip before I even needed to say anything else. I’m not sure people even knew I wasn’t Georgian. There is wonderful hospitality around the world — and then there is Georgian hospitality. So for your next food, wine and cultural vacation, there is no better place to travel. Here are the main reasons to start saying “madloba” and “gaumarjos” and get yourself to Georgia.

Do not sit down for a meal with Georgians without an exit strategy. Whether at a restaurant or someone’s home, the dishes keep coming — it’s even common to stack serving plates on top of each other. “To the Georgians, the guest is a gift from God,” says food writer Carla Capalbo, “and having a guest at your table is both a responsibility and a pleasure.”

There is something to make every eater happy in Georgia, with an abundance of meat, poultry, fish and vegetable dishes. Everywhere you go there will be fresh tomato and cucumber salads, homemade cheese and delicious bread, tonis puri, made from fresh dough smacked onto the side of barrel-shaped ovens. Georgia is similar to Italy, with each region having its own signature dishes, as well as their own variations of common foods — such as Khachapuri, a bread filled with cheese and eggs.  Be sure to try a Chakapuli, a lamb stew with tarragon leaves and cherry plums, Khinkali, dumplings filled spiced meats (or potato and mushrooms for a vegetarian choice), chicken tabaka, a flattened pan-fried chicken, or an Ajapsandali, a traditional dish of eggplant, tomatoes, peppers and tomatoes.

Georgia is the oldest-known winemaking culture in the world — evidence suggests they’ve been at it for 8000 years. “Ask your neighbors how many generations they’ve been making wine, they can’t count that far back,” says winemaker Iago Bitarishvili. “All they know is they’ve always made wine.” In recent years, Georgian wines are finally getting the international recognition they deserve, and have been championed by major writers, but you’ll still be way ahead of the average oenophile after learning your way around Saperavis and Rkatsitelis — two of the main indigenous grape varietals.

While there are larger wineries that are doing blends with more-familiar European grapes, the majority of Georgian winemakers are small, family-run operations using native varietals, many of which farm organically and are made in natural, minimal-intervention style. Georgians traditionally ferment and age wines in giant underground clay vessels, called kvevri, so whether you’re visiting a winery, or even someone’s backyard, you’ll be looking down, not up, to see the evidence of winemaking — and if you time it right, you might even be surprised by a winemaker climbing up out of one.

Tbilisi
Most trips to Georgia begin in the nation’s capital, Tbilisi, and there’s no better way to start immersing yourself in the nation’s food and wine culture. Wine bar Vino Underground was founded by a group of seven winemakers, and their selections feature typical small-production Georgian wineries. Another wine bar, g.Vino, takes a tapas-inspired approach to their wine bar, serving numerous small plates along with their wines, in a brand new location in Tbilisi’s Old Town. Both are great places to start drinking your way around the nation’s large variety and styles of wines. 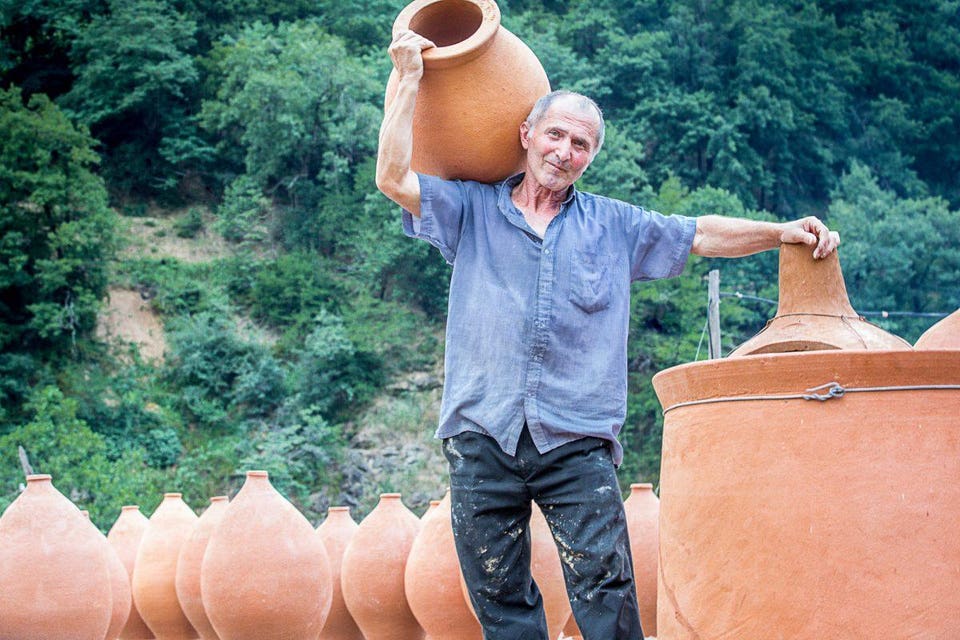 For restaurants, Barbarestan is a great introduction to Georgian cuisine, with recipes based on a 19th-century cookbook. Azarphesha also has great food, and while the atmosphere is more current, there is a collection of ancient wine paraphernalia on display — no guarantees, but if you’re very nice to the owner, you may wind up drinking some Chinuri from a 3000-year-old cup. Tekuna Gachechiladze is one of Georgia’s most famous chefs, and her Cafe Literra dining experience takes place in the backyard of the Writer’s House of Georgia, an Art Nouveau building, where she prepares modernist Georgian dishes. Her other restaurant, Culinarium, is more casual and practices what she calls “anti-hangover” cuisine — something you will definitely need during any Tbilisi trip.

To truly explore Tbilisi’s food scene, try a culinary walk from Culinary Backstreets, which will help you explore the “Deserter’s Bazaar” — the city’s oldest and largest open market. And be sure to try some of their recommendations off the beaten path just outside the city, like Kakhelebi and Megrelebi Manoni, where you can dine in a private cabin and enjoy specialties from Western Georgia.

Aside from food and wine, Tbilisi also has spectacular sights to visit. Walking through the “Old Tbilisi” district, there are beautiful churches, shops and art galleries. There’s no way you should still be hungry, but all over you will see Churchkhela, candle shaped candy hanging from strings, made from grape must and nuts. Tbilisi is built on top of hot springs, so taking in one of the Sulfur Baths in the Abanotubani district is a great idea — look for the igloo-shaped brick buildings. Above the baths, is the famous Narikala Fortress, originally built in the 4th century, but what remains is from the 16th and 17th century. For an easy visit to the upper part, a cable car ride is available. And further above the Fortress is the National Botanical Garden of Georgia.

Churches and Monasteries are essential visits in Georgia, and in Tbilisi you should start with the Metekhi Church, overlooking the Mtkvari river, which has been damaged, destroyed and rebuilt numerous times. The statue of King Vakhtang Gorgasali, atop his horse, stands outside. Anchiskhati Basilica, from the 6th century, is the city’s oldest church and the painted walls and ceilings of Sioni Cathedral are worth a trip.

Coming in Part 2: The Wine Regions and Monasteries of Georgia — Including Monasteries That Make Wine!

Original article and info about author is here