How Georgia, the Country, Became the World’s Most Exciting Fashion Destination!

Thanks to its hottest export Demna Gvasalia, the Eastern European nation has never been more popular

It’s been turbulent year for tourism in America. Back in September, the U.S Department of Commerce announced a sizable drop in international visitors to the country; around 700,000 fewer people traveled to the States in the first quarter of this year in comparison to 2016. The cause behind the dip (which represents a loss of close to $2.7 billion in spending) is unclear, but reasonable thinking suggests the results could be an effect of President Trump’s ban on travelers from six Muslim-majority countries.

Tourism was also down more than 10 percent in Europe, but in Georgia — the former Soviet Republic located in the Caucasus region of Eurasia — the statistics were dramatically different. According to data from its National Tourism board, between January and June of this year, international arrivals increased by 13.4 percent. In more human terms, that equates to nearly three million visitors — a figure just under the country’s own native population which currently stands at approximately 3.7 million.

Interest in the country’s upcoming creatives was jumpstarted when Georgian wunderkind Demna Gvasalia rose to fame. The fashion designer’s free-thinking label Vetements exploded onto the international scene in 2014, sparking an industry-wide craze for all things post-Soviet that shows no sign of abating today, nearly four years later. Gvasalia’s ascension in fashion allowed Tbilisi to be viewed as a legitimate travel destination, a place of exciting ones-to-watch for the first time in Georgia’s relatively recent war-torn history. 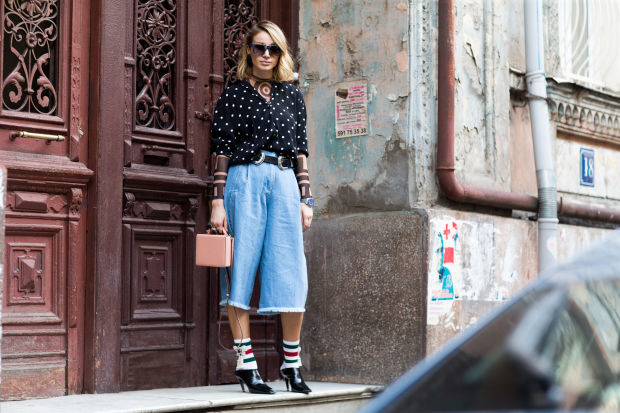 Former fashion journalist and current film director Sofia Tchkonia was among the first to officially concentrate on expanding the capital’s developing industry. Seeing the tremendous potential for growth, she paired up with Mercedes-Benz to launch Tbilisi Fashion Week in 2015. “I understood that, at some point, we needed a platform for all of the talented designers in our country,” she reflects. “During the first season, it was almost unbelievable that people would be interested in the Georgian fashion scene, but year after year, it’s been growing exponentially.”

Using her personal contacts, Tchkonia invites an increasing number of international journalists, editors, buyers and street style photographers in search of the next big thing each season, including representatives from Vogue, W, CR Fashion Book and Lane Crawford. The boost in media coverage from such guests abroad has helped her secure the additional backing and support of Georgia’s government for the event. Together with the National Tourism Administration and Ministry of Economics, she organizes workshops and business masterclasses for the participating designers, and has broadened the official show schedule to include special events for the press at Tbilisi’s top cultural and fine-dining establishments.

The head of Georgia’s International Tourism Promotion department Masho Bojgua pinpoints savvy shoppers from neighboring countries as another significant component in the rise of fashion tourism. The highest growth in the number of Azerbaijan visitors (around 1.5 million total) was registered in 2016, and travelers from Armenia, Turkey, Russia, Iran and Ukraine are among the other top visiting nationalities. As of June 2017, arrivals from the United Arab Emirates, India and the United States were up 247 percent, 172 percent and 33 percent, respectively.

Bojgua says that total expenditure by international visitors comes in at around $550 per trip; on average, individuals spend 29 percent of that figure on food and drinks, 19 percent on accommodations and 19 percent on shopping over 6.5 days. The remaining 14 percent is attributed to museums and other local attractions. In addition, she notes that 46 percent of all visitors spend the duration of their stay in Tbilisi.

Georgia’s hospitality sector has been quick to respond to the demand for better, higher-quality accommodations as tourism continues to grow. During Tbilisi Fashion Week, for instance, you’ll find guests holed up at the city’s leading lifestyle destination, Rooms Hotel Tbilisi. Operating under the Adjara Group Hospitality, Rooms is an accredited member of Design Hotels and offers 125 rooms and suites over eight floors in a restored publishing house. Its luxury decor, amenities and multiple dining options are comparable with those found in any major global destination — including fashion capitals like London and Milan.

Tbilisi’s most famous retail outlet is also attached to Rooms Hotel. Started by four local 20-somethings in 2016, Chaos Concept Store mixes Georgia’s most exciting young designers with bigger name brands like J.W. Anderson. More than a shop, Chaos contains a skate ramp and a ping-pong table, and also hosts one-off events during Tbilisi Fashion Week; plus, its founders and buyers are well-known influencers in the area. On the other end of the spectrum, underground mass marketplaces like Lilo Plaza attract cash-buyers looking to score imitation Vetements, designer knockoffs and bootleg Yeezys.

“Over the past six years, there has been a drastic change in the nation’s perception towards this new wave of tourism,” explains Adjara Group Hospitality’s Managing Director Levan Berulava, who counts professionals with backgrounds in art, music and fashion among his most high-profile guests. “Tbilisi is in a rapid stage of development; there have been vast investments and improvements in numerous fields in the tourism industry due to the interest of more sophisticated, Western travelers.”

So, what’s next? As with most developing nations, the biggest obstacle facing Georgia’s fashion and tourism industries is money. One sector with an apparent surplus of cash to spend, however, is Adjara Group Hospitality. Based on recent news reports, the company has invested more than $15 million in a second location in Tbilisi that’s slated to open next year. Called Stamba Hotel, the new outpost will serve as a sister to Rooms Hotel, offering upscale guests with a wad of notes to blow a backup option if either luxury locale is fully booked.

“We are not spoiled yet,” says Tchkonia. “Everything we’re building is new for our country and designers must work hard and fight for their own place on the fashion map so that we can be interesting for the rest of the world to come and see. In the near future, I hope we will look back and see the success of what we’re pioneering.”